Last weekend I got an email from a guy who had sold me a website before on flippa.com.  That website was making $50 per month and I way overpaid and bought it for $2,500.

I put no effort into that site and it's rankings fell off a cliff and it now makes about $3 per month.  That was an expensive lesson but I learned from it and moved on.

The guy who sold me that site had a new site for sale that he was selling on someone else's behalf.

This site was making about $500 per month and he was asking for $13,000 for the site.  After doing some investigation into the traffic and earnings, everything appeared to be on the up and up so I sent an offer over right away for the full asking price.

Here's a sample of what the earnings look like.  This is from the month of December which is always a great month for affiliate sites.

After doing some more due diligence like checking the backlink profile, reading over some of the posts and verifying the Google Analytics numbers looked good, I decided I wanted to buy the site.

A few weeks prior to this, I got an email from the same person with a different site for sale.  After 4 hours I was able to do my research and decide to make an offer but the site had already sold.  I knew I needed to act quickly and make a decision.

After just 30 minutes of research I sent an email letting him know I would buy the site.  Then I realized I needed to come up with $13k.  Luckily I had some bitcoin sitting around that was waiting to be put to use.

This story starts back 5 years ago in 2013.  I had heard a lot about bitcoin but didn't know if I should buy any or not.

I ended up buying a graphics card instead for $300 so even if Bitcoin crashed and burned, at least I'd have a nice graphics card for playing video games (shoutout to Rocket League, the best video game everrrrrr).

Over the course of 2 months I ran my graphics card 24/7 and ended up mining 2 bitcoins.  Yes, back then you could mine 1 bitcoin per month using a plain old graphics card.

At the time, bitcoins were only worth about $300 and with the extra electricity cost I was basically breaking even.

Of course if I had known that bitcoin would be worth $11,000 today I would have continued to mine bitcoin but hindisght is always 20/20.

I ended up shutting down my bitcoin mining operation after acquiring the 2 bitcoins and I never got back into it.  Over the next few years I spent bitcoin on a bunch of different sites and converted some into Amazon gift cards.

I ended up with about 1 bitcoin left over which is what I used to fund this purchase.  I sold it through Coinbase and cashed out all of my holdings.  I might expand this in another post, but basically I believe that Bitcoin is a great innovation and has some good use cases; but I'm not convinced Bitcoin is THE coin.  I won't be surprised if a new coin comes along in the next few years and completely replaces Bitcoin by being superior in fees, transaction time, etc.  In fact, some coins already exist that do this but they haven't taken off yet.

Usually when you find someone who has already achieved financial independence, you find out that they got there through 1 of 3 ways:

Buying real estate is a great strategy to build wealth, but compared to online real estate (aka affiliate websites), the valuations are insane.

For a $75k house in the Midwest (where I live), you can expect to rent it for about $750 and after all mortgage and expenses, you would be doing pretty good to net $100 per month.

Since you can get a mortgage to leverage your returns, you would be required to put down 20% which is $15,000 for something that produces $100 per month in income.

The website I purchased cost $13,000 and is currently throwing off $500 per month in income.

The reason websites have a higher ROI is that they are much riskier.  If Google changes their algorithm and your website gets penalized, you could see your earnings drop off a cliff overnight.  High risk = high reward and honestly I like not having to deal with tenants and having complete control over my own asset.  I can invest in it and grow it which isn't something you can do with a house.  That house will continue to make the same amount every month but a website can easily grow 5x or 10x in just a year if you know what you're doing (hopefully I do).

How I plan to grow this site to $5k per month

The good news is that the niche this site is in has very little competition.  The products sell for $100-$1,000 and the keyword difficulty is very low which makes it easier to rank in Google's search results.

The bad news is I have zero interest in this niche and I'd rather gouge my eyeballs out than write 'review' and 'best of' articles for these types of products.  Think if you had to write 100 articles about foot creams and bunions.  No thanks.

So what can you do?  I wrote in a previous article about using Textbroker to outsource my article writing.  Unfortunately the quality was very hit or miss and I spent more time editing some of the articles than if I had just written it myself from scratch.

For this project I've changed my strategy to use Upwork.  The great thing about Upwork is you get to pick the writers for your articles instead of trusting Textbroker to find a writer for you.

You can review their previous work, ask questions, and even negotiate rates.  For some of the 'money articles' that focus on reviewing $500 products, I'll go to a more expensive writer who produces higher quality content.

For informational articles like "7 tips to cure athletes foot" I could go to a cheaper writer that would do a good enough job and would explain the topic, but might not be as strong as the more expensive writer who can write so persuasively that it convinces people to click through to Amazon and make a purchase to earn that affiliate commission for me.

How I hired writers from upwork

In the past when I tried hiring from Upwork I made two mistakes.

The first mistake was hiring people from the Philippines and the second mistake was just hiring 1 person.

I don't have anything against writers from other countries, many of them are great writers and do a good job.  The problem is they're much harder to find.  Finding someone who can write in a conversational way with fluent English is pretty rare for foreign writers who charge less than $20-$40 per hour.

Finding someone from the United States who speaks fluent English is easy (duh).  Also many of them are able to write for about $20 per hour because they charge per word and can type quickly.

So the first thing I did on my job posting was restrict it to people form the Untied States.  I only wanted people who spoke fluent English and could give me samples that sounded like a human.  Nothing robotic or weird, just normal conversational writing.

The next thing I did was hire 6 people.  I paid each of them $50 to write a big 1,000+ word review for me.  After they all submitted their articles I picked out my 2 favorites and hired them.  Simple as that.

Even between the 6 writers from the United States there were HUGE differences in the quality.  The 2 writers I hired were INCREDIBLE and paying them $50 for an article is a complete steal.  Paying that same amount to the writer I'd rank #6 on the list would feel like a rip off.

So the two pieces of advice for hiring on Upwork are:

1. Hire people from the United States if you need high quality copywriting.

2.  Hire at least 2-3 times as many people as you need.  Be up front and let them know it's on a trial basis.  Choose the best 1 or 2 people and work with them on everything in the future.

what to expect going forward

You might be reading this and wondering why I bought an affiliate site when I just wrote a post a few weeks ago about how I was building an authority site from scratch.

When I started that site I didn't know I'd have the opportunity to buy this site.  When I saw it, I couldn't pass it up.  It fit exactly what I was looking for and was being sold for a pretty good price (22x multiple on earnings, normal is 24x-36x).

The real strategy that will enable me to handle both of these sites is that I'm going to outsource almost all of the content creation.

I hired 6 writers for this new site and picked 2 of them.  I also hired 2 writers for my other site who will be pumping out articles for me at a rate of 4-6 articles per week which is about triple what I was doing when I was really focusing on it.

If you want to scale a website and grow it to provide substantial income, you have to treat it like a business.  There's a reason large companies are large and not just 1 person.  You can't do it all yourself and the sooner you create the infrastructure to grow, the better.

I'll post monthly updates tracking my Amazon FBA business, authority site #1, the new authority site, and even this site just in case it starts making money.  These posts will be monthly and I'll give a full breakdown of progress reports and income reports.

I'll also be detailing my strategies in tactics in some other posts to explain how I'm growing these sites like keyword research strategies, how I'm building backlinks, and anything else I come across that I think would help other people copy my process and have similar success.

If you want to stay up to date with all of my new posts, just drop your email address below and I'll let you know when new posts go live.

Black Friday and Cyber Monday Shopping is the Greatest 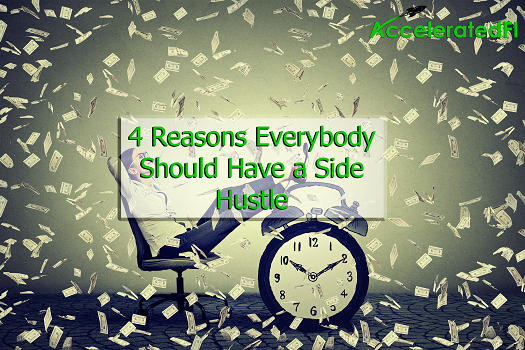 4 Reasons Everybody Should Have a Side Hustle