What’s Your Net Worth?

Do you know what your net worth is?  Most people don’t and probably don’t care to.  But if you’re here, you’re different, and this is an important number you should know.  Your net worth is all of your assets (cash, stocks, house, etc) minus all of your debts (mortgage, student loans, etc).  Simple, right?  Once this number hits your retirement savings target, you are financially independent and can retire whenever you want!

You Really Should Know Your Net Worth!

I’ve never calculated my net worth before mainly because all of my accounts are so segregated that I’ve never seen everything in one spot.  After seeing the net worth tracker over at Rockstar Finance I thought it would be a good idea to see where I’m at and start tracking it every single month.  The first reason being that it is a good habit to do, and second of all, it’s pretty awesome to see!  When you’re pulling out money pre-tax for your 401k and you have automatic deductions for your Roth IRA, it can sometimes feel like money is just vanishing from your accounts every week never to be seen again.  But rest assured, it’s there, and it’s growing for you and over just a few years it can really add up (especially when the market does well like it has over the last 5 years).

My Net Worth Calculation

If I had to guess, I thought it would have been around $100k, maybe $110k and I only know that from seeing my 401k when I rebalance it every so often.  So here’s the breakdown: 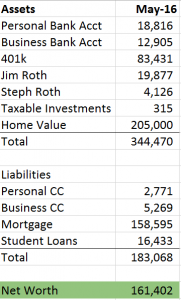 I don’t have data exact numbers going back to 2011 when I started working full time but I did my best estimates and came up with this: 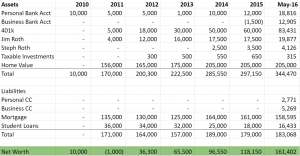 And here it is in pretty graph form: 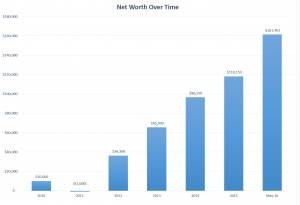 So the brief story behind this is I graduated in 2010 and worked as a contractor, then started full time in 2011.  I didn’t know too much about retirement or saving money but got really interested in finance and things started to click in 2012 so I really upped my savings.  At the same time the stock market was doing great as it recovered from the 2008 recession so I saw some great gains in my investments as well.

We also bought a foreclosure in 2011 and saw it appreciate by about $20k over the next few years before we sold it and moved into a different house, closer to work.  The other thing that helped out in those first few years was being DINKs (dual income, no kids).  That eventually changed when my son was born which slightly slowed down our savings (daycare is expensive as f@#$ so it actually really slows down your savings).

My wife graduated in 2011 which is why we picked up $36k in student loans which we have slowly been paying down over the last few years.  Most of the loans are deferred so while she goes back to school to get her graduate degree we don’t have to pay any interest which means we have stopped paying the loans off, but are still setting aside $1,000 per month so hopefully we can drop a lump sum on them and be done by the time she graduates.

So that’s the long story of how I went from $0 to $160k in net worth in 5 years.  I had a lot of help from my parents who gave us money for weddings, cars, etc which saved us from not only spending money but probably making some really stupid decisions like most new college graduates are prone to.

My goal is to update the net worth every single month mostly for my own motivation so I can remember why I’m saving my money and what I’m shooting for.  My tentative early retirement savings number right now is between $1.5 million and $2 million.  For a conservative and fully livable retirement though I am only shooting for $1 million, the extra $1 million would just be as a buffer since I don’t see the point in retiring early just to live a miserly existence for the next 50 years.

It’s a pretty big confidence boost to see where my net worth is at and makes me feel like the money I’ve saved is actually going somewhere and not disappearing.  So what’s your net worth?  If you’d like to calculate it I highly suggest using Mint.com to track your savings accounts and credit cards and also SigFig for tracking your investments.  They seem to be the only site out there that can track my 401k from my employer and their dashboard is pretty sweet too.[/fusion_text]