Last month was a fantastic month for my FBA side hustle.  My new products I’ve launched are starting to increase in sales and I was able to fine tune my ad spending to increase my margins.  I’ve started using an awesome software called HelloProfit.  It’s pretty expensive at $79 per month but it’s the only service I’ve found so far that shows your true margin on each product including refunds and ad spending.  So here is what HelloProfit shows for August: 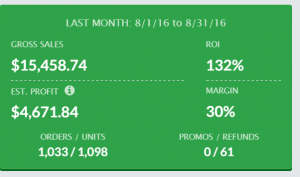 The profit estimate there is pretax which is pretty significant when you are making money on your own and have to pay your own self employment tax which is about 15%.  So with the self employment tax and my normal tax rate of 25%, I have to pay 40% of that profit amount back in taxes.  The 60% that’s left over for me, after tax, can either be taken as profit or reinvested into the business.

I have several new products in the pipeline that I will be launching in the next 30-60 days and that will require roughly $3k of capital for the first product and $6k of capital for the second one, so $9k I need to reinvest into the business in order to keep growing.  Both of these products will be at higher price points and should have better margins than my current products.  I’m pretty confident that once I get these products launched, hopefully by the beginning of November, my monthly sales will increase from $15k to $25k-$30k.  That’s also going into Christmas time though which is HUGE on Amazon.  Last year in December I did 2x my normal monthly sales which means I could possibly see up to $50k-$60k in sales just in December.

Since one of the constraints on growing a physical product business is the amount of capital required to build your inventory, it usually makes sense to borrow money to fund the purchase of inventory.  When you buy thousands of units from China and ship them by sea it can be 45-75 days between paying for your order and finally getting it into Amazon’s warehouses to sell.  This means you can tie up huge amounts of money for a long time which limits your growth.

Enter Amazon Lending.  After you’ve been selling on Amazon for 12 months, an offer will appear in your account page where you are pre-approved for a loan based on your sales from 12 months ago.  It looks like the loan amount is roughly the same as what your monthly sales were from 12 months prior, so if you’ve been growing the loan amount will be pretty small.  Additionally, the interest rate (at least for my loan offer) was just over 15% and the loan must be paid back over 6 months.  The interest rate is pretty high and is basically the same as what you would pay on a credit card so I’m not really sure if there’s much benefit to using Amazon Lending.  I did take out a loan of $4,000 to cover a few orders I was placing at the time but once I pay this loan back I am not going to be utilizing Amazon lending anymore.  I have 2 business credit cards that I signed up for to get some travel perks (50k miles per card, roughly $1,000 value total) and each card has a $20k limit so if I really want to ramp up the growth and take on some risk, I can just throw it on the credit card and pay a similar interest rate.

In a previous post I detailed my purchase of a website through Flippa.com.  This website was earning roughly  $50 when I bought it and I paid $2,500 for the site which is definitely more than it’s fair value which is probably closer to $1,500.  Despite the high price tag, I wanted to learn how to run a website and grow the affiliate earnings so I jumped in.  My goal is to grow the Amazon business to $30k per month, which means it would be kicking off about $10k per month in pretax profit.  Once I save up 50k or so I would buy a larger website that’s making more per month.  But before I go and drop 50k on a website, I wanted to dip my toes in with a much smaller venture in case I totally screw it up.

So long story short, I finally received my first payment from my affiliate site!  It was a paltry $31 but it’s something!  Amazon’s payout terms for affiliate sites suck.  You get paid for your earnings 2 months after you’ve made the sales on Amazon.  So the payment I just received was for all of the affiliate commissions I racked up 2 months ago in July.  Also you’ll notice I made $31 where the site was making $50 before.  I’m working to add more articles and create more content.  I’m also working on getting some backlinks to improve my search rankings and hopefully get more visitors which means more money.  This site is definitely on the back burner right now since the physical products on Amazon have so much more potential to scale and are much closer to a ‘real’ business.  However, with the long shipping times when importing products and the capital constraints, the affiliate site is a nice little side project to keep me learning while I’m waiting for the Amazon products to arrive.

Do You Want to Sell on Amazon?

I’ve always wanted to create a course teaching people how to sell on Amazon but with 2 kids, a full time job, and my own side hustle going on, I just don’t have enough time right now.  I’ve decided to open up a consulting program so if anyone is interested in selling on Amazon and would like to use my experience as a personal consultant, I’m accepting applications, just email jim@acceleratedfi.com and let me know where you’re at in your journey and what you need help with.  This service costs $999 per month right now and may go up later.  Ideally you would only need my help for 1 or maybe 2 months at most to get your products up and selling on Amazon, then you should be able to take what you’ve learned and apply it to your own products in the future. 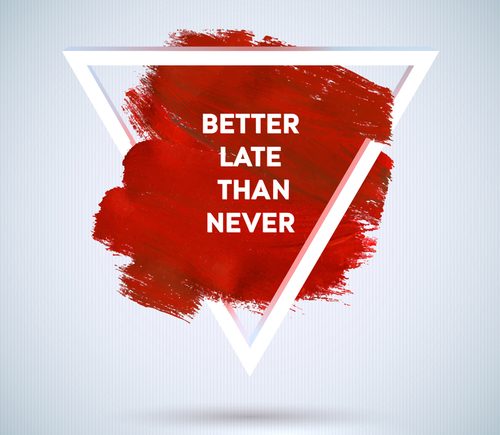 Is It Too Late to Start Selling Products through Amazon FBA? 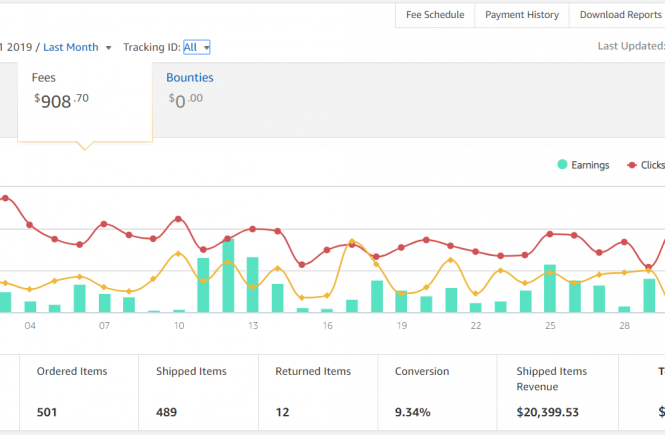 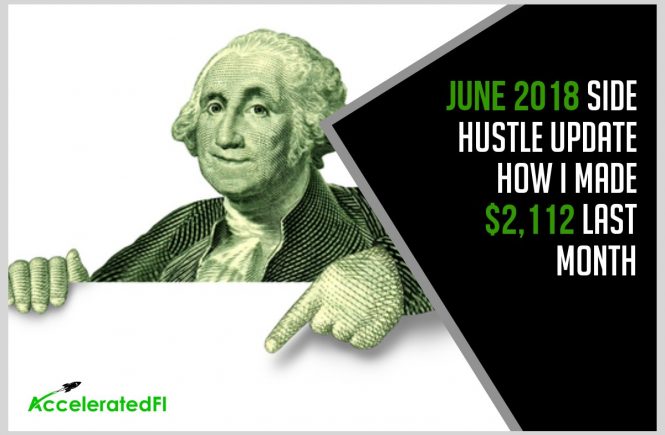